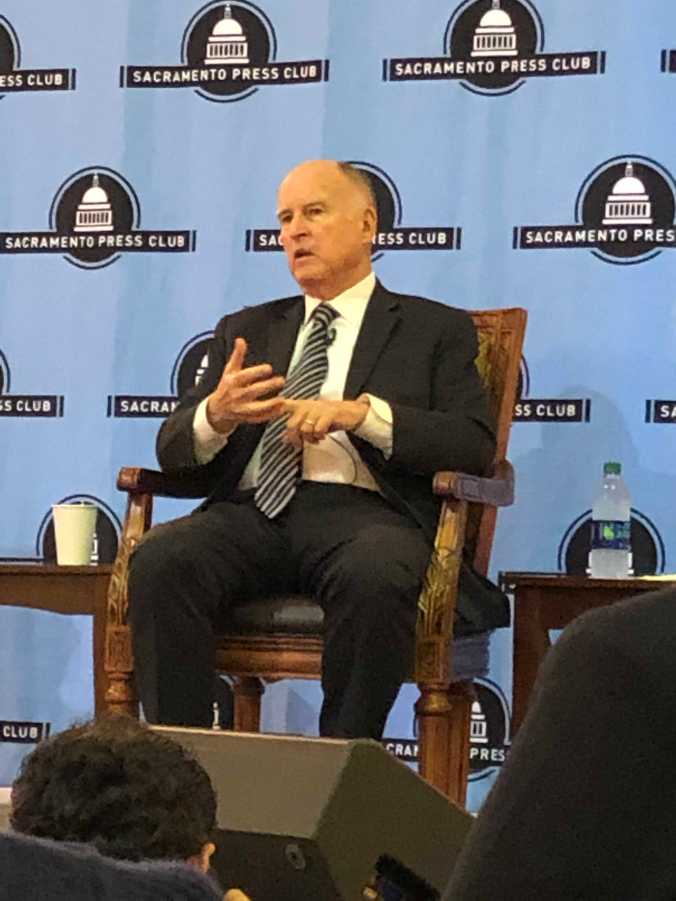 Gov. Jerry Brown is known for his infrequent and rather unscripted press conferences, often making glib remarks, or quoting Zen Buddhism, Latin theology, philosophy, and “ontology” – the nature of being. Tuesday Brown did not disappoint during his “Exit Interview,” as he prepares to leave  the Governor’s office for the last time on Jan. 7.

“I don’t do that many press events,” Brown said as he made his way on stage. “There’s so much media now.”  Given that Brown began his political career right out of college in 1969, he dealt with mostly newspaper reporters and television news at that time.

Tuesday, in front of hundreds of credentialed California media and state government employees, Brown called today’s media “the legitimate ones” and “all sorts of characters running around social media,” when asked how he deals with media. “The proliferation of social media is just all kinds of noise,” Brown said. “The news cycle never stops.”

Asked if California’s Obamacare plan – Covered California – will be able to continue following the recent federal District Court ruling finding the Affordable Care Act unconstitutional, Brown said he thinks it will be overturned, and that the decision will impact the next presidential election. “Congress will probably overturn, because it will create such a backlash,” Brown said. “And Democrats will take over the Senate.”

After serving a record four terms as California Governor, Brown was asked about the many times he’s campaigned for office, and whether it was too much. Brown spoke about how much he likes campaigning “because it’s exciting, and it’s a group activity.”

“People like being around other people,” Brown said. “We are a tribal species; campaigning is very tribal.”

Asked if it was a mistake to run for President too many times, Brown replied that it was. “What works in one campaign doesn’t work in another,” he said. Jerry Brown ran for President three times: 1976, 1980 and 1992.  “It’s timing, circumstances and luck,” he added.

While Brown said that he didn’t regret running for so many offices, had he not lost, he never would have had time off to enjoy “working for Mother Theresa and practicing Zen medication in Japan,” following his 1982 unsuccessful U.S. Senate run.

Brown was asked to explain his proudest accomplishment, but instead said he was more concerned about the future, especially “a nuclear war to avoid” and climate change – which caused the media crowd to clap wildly and cheer.

When asked about his California High Speed Rail project, he said it would be built, along with the Delta’s “twin tunnels” project moving water from northern California to the south. While he said Southern California draws too much water from the north, “the Delta will be destroyed unless we have some kind of peripheral canal or a tunnel.”

Brown said he doesn’t like flying: “I don’t like it on the plane. You go up. You go down.” He said at his age he shouldn’t be driving. “On the train you can have a cocktail,” Brown added.

Brown said with a “very good chance of seeing it [high speed rail] built, then California will be an innovator – the only state in the country to do this. We will join the countries of Japan and Germany as innovators,” Brown said.

As for the future, Brown claimed he left only a “baby deficit,” rather than the trillion dollar deficit California currently has, according to Sen. John Moorlach, the Legislature’s only CPA.

As for what he will miss, Brown said he’s miss the Governor’s Mansion – “except all of those steps. I now know why Reagan wanted to move into that one-story house,” he added.

When asked what will happen to PG&E, and if it would go bankrupt, after the wildfires for which the utility company is being blamed, Brown said, “the CPUC (CA Public Utilities Commission) has to keep them accountable, but it’s a strange model.” Brown said the next governor will deal with PG&E and the CPUC.

Brown pivoted to climate change and described California’s “new abnormal” as regular drought and fires. “This business of climate change is real,” he said. “The humidity goes down, and everything is dying. It becomes kindling for fires. What we’re seeing is just the prologue for fires.”