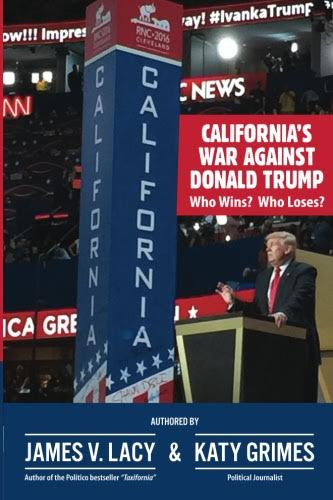 California has just declared war on Donald Trump and the rest of America!  In Katy Grimes and Jim Lacy’s most recent book, California’s War Against Donald Trump: Who Wins, Who Loses? they detail California’s decline and how it can rebound.

“California, in many ways, is out of control,” said President Donald Trump, just a month into his presidency.[1]  As two authors, one based in the north of the state and the other in the south, who have observed, written and commented extensively over the years about California and its public policy, we completely agree with Trump.  California is out of control.

California may be the “sixth largest economy in the world,” as its liberal Democratic leaders in control often say, but its wealth creation that gets it to six, which includes agriculture and entertainment, is largely the work of just one industry: Silicon Valley high technology.  At the same time, the state has the highest poverty rate in the nation when cost of living is considered, a fact the liberals in control don’t like to discuss.  Violent crime in major cities is on the rise.  Under-employment and unemployment rates regularly exceed those in the rest of the nation.

The state may have the best cabernet in the nation, yet among the worst schools as well,[2] even though about 40% of state funding, the biggest budget line-item by far, out of California’s huge $183 billion budget, goes to the schools.[3]  It is a state where cities have gone bankrupt, and the state pension system is underfunded by close to $1 trillion.  There are over 625,000 public employees drawing pensions across the state, and well over 20,000 of them receive $100,000 or more in annual benefit, but their grossly underfunded pension plans still draw billions of dollars in taxpayer funds previously used for pubic safety like road maintenance, firefighters and police services, which are all suffering and themselves in need of more funding.

California taxpayers pay the highest state income tax in the nation, the highest state sales tax, the highest gas taxes, and the highest state corporate tax west of the Mississippi.  These sky-high taxes yield the state about $150 billion a year, and that is on top of the additional $100 billion Californians pay in federal taxes.[4]  The tax base is grossly uneven in the state.  “Those in the top brackets, a tiny portion of the overall population, pay about half of the state income taxes, which can be a problem,” wrote Sacramento Bee columnist Dan Walters.[5]  The state has been listed almost every year for close to a decade as the worst state in the nation for locating a business by CEO magazine.[6]

In a state that is plagued by natural disasters like wildfires and drought, because of environmentalist objections, a new dam to store sorely needed additional water has not been built since 1959.

Yet with all its problems, California’s liberal leaders have decided that rather than work on fixing their own state, it is more important to declare war on Donald Trump and almost all his policies.  From sanctuary city policies, to “The Wall,” to healthcare, education, the temporary travel ban, federal regulatory policy, thwarting enforcement of immigration laws, and especially climate change, these liberal Democrats in the state are demonstrating such a vicious hostility to Washington, D.C. that one wonders if they have even considered if their actions might be doing more harm than good for their causes and the people of the state.

This work takes a good analytical look into how California’s War Against Donald Trump is fairing and reveals just who is winning, and losing, from all the political grandstanding.  With hundreds of sources cited, we hope the reader may be persuaded to understand that the state we love, and have no plans on leaving, which is facing enormous challenges, is not helped much at all by its liberal leaders gratuitous resentment and lack of willingness to work with the Trump Administration in civil fashion, for the benefit of the people.  If we cannot persuade, we hope that in this work we have at least offered the reader some intelligent balance in the debate about the future of California.