Wealthy leftists engage professional grievance hustlers to pay protesters to destabilize and destroy America. And people are standing by watching like a train wreck in slow motion, waiting for someone else to do something.

At anti-Trump protests during the election, protesters admitted they answered ads on Craigslist and were getting paid to protest Trump. The protests are largely paid for by George Soros, MoveOn.org, reclusive billionaire Jonathan Lewis, and pushed by David Brock at Media Matters for America. I’ve been writing about this for several years. 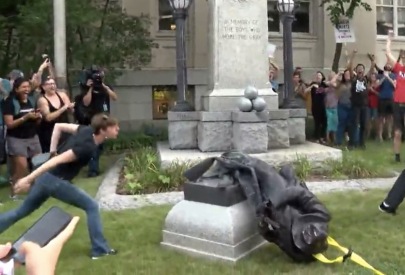 Leftist Activists demanded Monday that the American Museum of Natural History in New York City take down its statue of ‘racist’ Theodore Roosevelt. Apparently “the statue is seen as an affront to all who pass it on entering the museum, but especially to African and Native Americans.”

Marching around the museum in a fit of self-righteous rage, protesters carried signs that read “BLACK LIVES MATTER,” “DECOLONIZE THIS MUSEUM,” and “ABOLISH WHITE SUPREMACY,” the Daily Wire reported.

“A stark embodiment of the white supremacy that Roosevelt himself espoused and promoted,” pontificated the group of protesters in a statement.

Denying the History of the South

Leftist activists continue to demand that southern states take down statues of Confederate figures. Some argue that Confederate war monuments shouldn’t be funded with taxpayer dollars. Others say these monuments are a part of American history, and whether it’s positive or negative history, they should be treated as such.  Leftists on the other hand, have instead determined that it’s fine to tear down statues they don’t like.

Former South Carolina Governor Nikki Haley spearheaded the removal of the Confederate flag from the State Capitol in what many described as a purely political move and acquiescence to the irrational left. And not everyone was happy about this. “The majority of Republicans in the first state to secede from the Union is that they see the flag as a symbol of Southern pride rather than of racial hatred, according to a 2015 Winthrop University poll,” The Daily Caller reported. “That poll, which was taken shortly after the Confederate flag was taken down, found that nearly 70 percent of Republicans in the state view it positively, but more Republicans said they supported its removal than PPP’s recent survey.”

White supremacist activists rioting in Charlottesville, Virginia last weekend, demanded a statue of Robert E. Lee come down. Lee was an American general who commanded the Confederate Army of Northern Virginia in the American Civil War

A teenager also attacked the Holocaust Memorial in Boston, Mass., which had previously been vandalized in June., PJ media reported.

The Lincoln Memorial was vandalized with the words “F— law” written in red spray paint early Tuesday on a pillar at the monument.

“This week it’s Robert E. Lee, I noticed that Stonewall Jackson is coming down,” President Donald Trump said at his press conference on infrastructure Tuesday. “I wonder, is it George Washington next week, and is it Thomas Jefferson the week after? You have to ask yourself, where does it stop?”

The moronic idiots who tore down the Confederate statue in Durahm, were chanting “We, we are the revolution!” and “No Trump, no KKK, no fascist USA!” Then when it was down, like a scene from Planet of the Apes, they took turns kicking it, giving it the middle finger and spitting on it.

Durham County Sheriff’s deputies watched and videotaped the statue toppling, but did not intervene. Was this another stand-down order?

If you examine the crowd, you’ll notice they are all young people — Ignorant, uneducated young people, who obviously have not been taught U.S. History, or anything truthful about the Civil War.

In 2014 and 2015, Islamic terrorists (ISIS) destroyed the Mosul Museum just as it was about to reopen after years of reconstruction.

The Christian Science Monitor asked why ISIS is destroying ancient artifacts in Iraq. “The destruction of ancient Iraqi artifacts – a tactic employed in cultural genocide – is part of the Islamic State militants’ efforts to reform the region into a single, homogenous Muslim caliphate under its control,” the CSM wrote. A video surfaced showing members of ISIS using sledgehammers, pickaxes, and even jackhammers to the ancient artifacts, but has since been removed by youtube. CNN still has video of this.

What’s the difference? The young idiotic American thugs are destroying property also in a form of cultural genocide. The statue depicted a Confederate soldier atop an engraved pedestal that read, “In memory of ‘the boys who wore the gray.’ ” It was erected in 1924 and stood 15-feet tall, according to a memorial database. One side of the granite pedestal depicts a Confederate flag, the Washington Post reported.

Groups at the rally included members of the Triangle People’s Assembly, Workers World Party, Industrial Workers of the World, Democratic Socialists of America and the anti-fascist movement, the Herald Sun reported.

“Charlottesville and racist monuments across the country are the result of centuries of white supremacy,” Alissa Ellis, a member of Workers World Party Durham branch that was a participant in the Charlottesville protests, told the Herald Sun. Her group mobilized members on Facebook to attend the Durham event.

Loan Tran, an organizer of the action, told the TV station earlier Monday. “These Confederate statues in Durham, in North Carolina, all across the country. … When I see a Confederate statue in downtown Durham, or really anywhere, it fills me with a lot of rage and frustration.”

They also saw the Trump administration as promoting white supremacy. “Charlottesville and racist monuments across the country are the result of centuries of white supremacy,” said Alissa Ellis, a member of Workers World Party Durham branch, the paper reports.

“The Durham Solidarity Center supports the right of Durham and all people to tear down symbols of hate!”

In his press conference Tuesday, Trump enraged media talking heads by blaming the vitriol and violence in Charlottesville on both sides. “Most adults know by now that it takes two to tango but not the court jesters in the MSM who promised the globalists they’d take the president down by whatever means necessary,” Judi McLeod wrote at Canada Free Press.

Objecting to the removal of an historical Robert E. Lee statue, does not make one a Nazi sympathizer. Robert E. Lee is an important part of U.S. history, even though he was a Commander in the Confederate Army. Following the Civil War, Lee went on to become the President of Washington College in Lexington, and helped grow the college financially and physically. He had previously been a Superintendant at West Point, and Lee distinguished himself in the Mexican–American War (1846–48).

Trump’s detractors will claim he said there are very fine neo-Nazis. But if you listened to what he said he was clearly trying to make a distinction between the one group and the other.

Opponents apparently wanted Trump to grovel… or disavow all white people… and of course, to resign as President.

“Apparently these are the rules: If Nazis are involved, Nazis are 100 percent at fault for anything and everything that happens, no matter who else may have done what.”

“Whenever Trump pointed out that the alt-left bore some responsibility for what happened in Charlottesville, reporters demanded to know: “Are you putting the alt-left on the same moral plane as the alt-right?”

The president replied that he wasn’t looking to put anyone on any moral plane. He was simply stating an obvious truth about what happened in Charlottesville.”

The Left is Silent About Marxists and Socialists

While we are tearing down the statues ignorant little snowflakes find offensive,  Vladimir Lenin statues still proudly stand in America today. Lenin killed millions of his own people, many in concentration camps, and openly sought the execution of political adversaries, IJR reported.

While we are tearing down confederate statues, mass murderer Che Guevara, the communist Cuban mercenary during Castro’s coup is a hero of the American left. While ignorant leftists wear his image on T-shirts, thinking they are so cool, they ignore that Guevara is no teen idol. Historians accurately detail his life as a murderous, genocidal concentration camp-running brute who longed for a nuclear apocalypse, according to previous Independent Journal Review reporting.

Then there are all of the monuments, roads, buildings and parks named after former U.S. Senator Robert Byrd, a Democrat from West Virginia, who was a Klan member. “When Byrd was 24-years-old, he joined the Klan because he was worried that during World War II, he might have to fight alongside ‘race mongrels, a throwback to the blackest specimen from the wilds.’ Bryd wrote those words in 1944 to Sen. Theodore Bilbo, a staunch segregationist,” the Daily Caller reported. Byrd not only joined the KKK, but also led his local chapter.

Democratic presidential candidate Hillary Clinton once heaped praise for late Klan leader Sen. Robert Byrd: “It is almost impossible to imagine the United States Senate without Robert Byrd. He was not just its longest serving member, he was its heart, its soul, and its historian. From my first day in the Senate, I sought out his guidance, and he was always generous with his time and his wisdom. I admired his tireless advocacy for his West Virginia constituents, his fierce defense of the Constitution and the traditions of the Senate, and his passion for a government that improves the lives of the people it serves. And as Secretary of State, I continued to rely on his advice and counsel.”

Let’s Not Lose Sight of What Happened, and What is Really Going On

All that happened in Charlottesville – the violence, hatred, and radical extremism, should be reviled by Americans. Instead the media has tried to ignore the left’s involvement, and make it all about “white nationalists.” The Antifa groups that protested the white nationalists were there also to incite violence.

There’s enough hypocrisy to go around. Why are so many Republicans silent, while the left is beating this drum to death? Pathetically, weak-kneed Republicans fear the media so much, they don’t want to be linked at all to the white nationalists. So they are silent, or make wishy washy statements to make it sound as if they are in agreement with the left.

Trump said his initial “all sides at fault” statement on Charlottesville was more than adequate because he did not know the full story as of Saturday afternoon, Fox reported.

“Unlike you, before I make a statement, I like to know the facts,” he said.

The rest of America should do the same. And in the meantime, we need to figure out how to get those birdbrained snowflakes educated.